STUDY OF THROMBOCYTOPENIA IN MALARIA AND ITS CORRELATION WITH SEVERITY OF MALARIA: A PROSPECTIVE STUDY

Background: In poor resource countries malaria is still an important threat to public health. Role of hematological parameters mainly platelet count in acute malaria and its severity is not fully understood.

Aims and Objectives:  To study thrombocytopenia in Malaria and its correlation with Severity of Malaria.

Materials and Methods: Hundred confirmed malaria patients were studied at Department of Medicine, Gandhi Medical Collage from March 2015 to September 2016. After a details history taking, all the patients undergone a blood testing for the presence of confirmation on type of malaria infection. Based on the blood reports all the patients were divided in to those having P. falciparum infection, P. vivax infection and mixed type of infection. Thrombocytopenia was considered if platelet count was <75000 cells/mm3.a 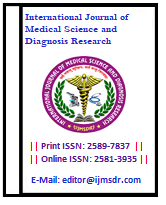